Yesterday, Alona also made Mile High Coconut cupcakes. These are very light and yummy. They are made with coconut milk and egg whites only. The first time we made them a few weeks ago and followed the recipe, but the frosting turned out a little too light and not sweet enough. This time, we modified it by adding an extra 1/2 cup of sugar to the frosting. We also want to make sure the frosting is cooked, so we put it in the oven at 350 F for an extra 5 minutes. Also, the additional sugar not only made the "frosting" more sweet, but it also made is stiffer which made it much easier to work with.
We really think that using the fresh eggs from our hens makes a big difference in this recipe as these usually get much fluffier beaten egg whites than the store bought eggs.

Also, the first time we made the cupcakes, we didn't have any vanilla bean, so we just used vanilla extract instead, and it seemed to work just as well. The difference is not noticeable.

The original recipe says this will make 12 cupcakes, however, the first time we made 16 and they were kind of tall, this time we made 18 and they were still tall. This recipe could probably make 24 cupcakes that are not overly tall, and the icing will most likely sit better on the shorter cupcakes as well. There should be sufficient "icing" to go around as well.

Here is the original recipe: http://www.myrecipes.com/recipe/mile-high-coconut-cupcakes 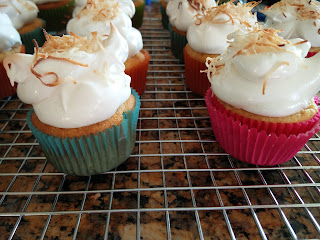 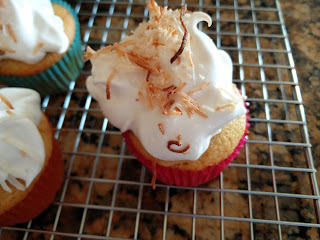 3. Place remaining 3 tablespoons coconut on a baking sheet. Bake at 350° for 5 minutes or until toasted, stirring after 4 minutes. Make sure to watch as it bakes, the coconut will start to get toasted very quickly.

4. Combine flour and next 3 ingredients (through 1/4 teaspoon salt); stir with a whisk. Place 3/4 cup sugar, butter, and oil in a large bowl. Beat with a mixer at medium speed until light and fluffy (about 3 minutes). Stir in cooled milk mixture. Add flour mixture; beat at low speed until combined.

5. Place 3 egg whites and 1/2 teaspoon cream of tartar in a large bowl. Using clean, dry beaters, beat at medium speed until foamy; beat at high speed until soft peaks form. Gently fold one-fourth of beaten egg whites into batter; gently fold in remaining beaten egg whites. Divide batter among 12 muffin cups lined with cupcake liners. Bake at 350° for 17 minutes or until a wooden pick inserted in center comes out clean. Cool 5 minutes in pans. Keep the oven on so you can cook the "frosting" as well.

6. Combine 1/2 cup sugar, 1/4 cup water, and dash of salt in a saucepan; bring to a boil, stirring just until sugar dissolves. Cook, without stirring, to 230°. Place 3 egg whites and 1/2 teaspoon cream of tartar in a large bowl; beat with clean, dry beaters at medium speed until foamy. Slowly add in 1/2 cup of sugar. Beat at high speed until medium peaks form. With mixer at low speed, pour hot syrup in a thin stream down side of bowl. Gradually increase speed to high; beat 3 minutes or until thickened. Beat in extract.

7. Mound about 2 tablespoons icing onto each cupcake while they are still in the cupcake pan. Sprinkle with toasted coconut.

8. Put back in the oven at 350 F for 5 minutes. Take out and let cool a little, then transfer to wire rack. We found it easiest to take the cupcakes out using two forks.

Very light and airy and fluffy. They look stunning and are not too hard to make. The coconut flavor is very different.

Nick thinks they are too high, but Alona thinks that's part of the appeal.

Keep the 1/2 cup extra sugar in the frosting!
Posted by kotenka at 8:57 AM