We found a lot of salad recipes for this week! That's exciting :)
This was a very different type of salad, oddly enough the arugula, which is often bitter went really well with the lemony potatoes.
This was fairly quick and easy to make. We did not grill, as we have a fairly large grill and didn't want to start it up for just a few potatoes and shrimp. We steamed the potatoes in a steamer, lining it with foil and still putting the olive oil, salt and pepper on them. We also just fried the shrimp, and that turned out quite well. The recipe could benefit from some bacon as it does really seem like it's missing something. Instead of fingerling potatoes, we just used red and yellow baby potatoes.

Here is the original recipe: http://www.foodandwine.com/recipes/grilled-shrimp-lemony-potatoes 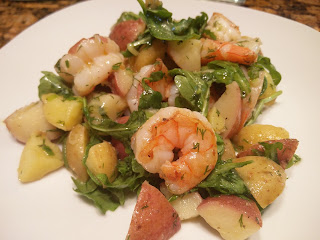 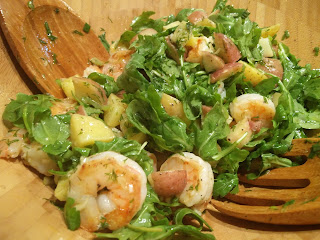 1. Half the baby potatoes, if they are on the bigger side. Combine potatoes with 2 tbsp olive oil and salt and pepper in a bowl. Line the steamer basket with foil and place the potatoes to steam. Steam for 20-25 minutes
2. While they are cooking, prepare the herb oil by combining 1/2 cup of olive oil with the chopped dill and green onions and lemon zest. Add salt and pepper.
3. Toss shrimp with 2 tbsps olive oil and season with salt and pepper. Fry until done, about 4-5 minutes. Drizzle half the lemon juice on the shrimp.
4. Cut cooked potatoes into smaller pieces and combine in a large bowl with arugula, remainder of the lemon juice, and the shrimp. Mix.

He isn't into salads