Although this recipe calls for 'sweet potatoes', we highly recommend using yams, jeweled yams to be exact. Sweet potatoes and yams are very different and are even from different families of plants. Well, we were not 'quite' sure what this recipe meant, so we got both sweet potatoes, which were white. We also got jeweled yams which were bright orange in color and much sweeter.
The marshmallow turned out shockingly delicious! There was too much of the orange/honey syrup though, so would recommend maybe halving it. We did toast the marshmallow topped yams in the oven to make them warm and delicious. We did substitute maple syrup for corn syrup in the marshmallow which gave it a little bit more of a mapley flavor which we liked. 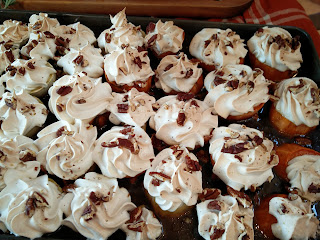 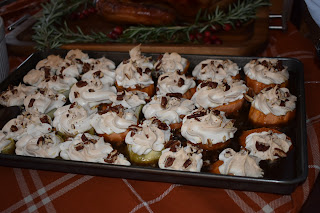 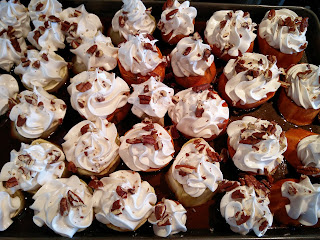 1. Preheat the oven to 400°. Peel and cut the potatoes into rounds, about 1" thick and put them on a rimmed baking sheet. Brush with olive oil and season with salt. Bake the potatoes for about 1 hour, until tender.
2. Meanwhile, spread the pecans in a pie plate and toast in the oven until golden and fragrant, about 7 minutes. Let cool, then coarsely chop.
3. In a medium saucepan, combine the orange juice with the honey and brown sugar and bring just to a boil, stirring to dissolve the sugar. Let the honey syrup cool.
4. In another medium saucepan, combine the granulated sugar with the maple syrup and water and cook over moderate heat, stirring occasionally, until the sugar syrup registers 240° on a candy thermometer.
5. In a stand mixer fitted with the whisk, beat the egg whites with the cream of tartar at medium speed until soft peaks form. Turn the machine to medium-high and drizzle the hot sugar syrup into the egg whites in a very thin stream down the side of the bowl; beat until stiff peaks form and the marshmallow is cool. Scrape the marshmallow into a pastry bag fitted with a medium straight tip.
6. Spoon some of the honey syrup over the potatoes and on the platter. Pipe the marshmallow topping onto the potatoes and, using a kitchen torch, lightly toast the tops. Sprinkle the pecans over the top and serve.

Very yummy! The marshmallow and syrup was great!

too much honey syrup.

He was suspicious of this food item.