We had a party on Saturday and these are the cupcakes we made for it. They were delicious. The frosting was perfect. We are still learning to pipe frosting and do decorative stuff, but we tried.
We made a batch of chocolate cupcakes and a batch of the lemon ones. Then, we doubled the recipe for the raspberry frosting to cover both batches. We ended up with 35 cupcakes total.
The strange thing was that the chocolate ones "fell" (had dimples in the middle) after cooking. But the lemon ones did great. We upped the temperature by 5 degrees for the lemon ones (they cooked second), just in case the oven temp was off.
These not only taste good, but also look wonderful... even with our ahem, "creative" frosting job. 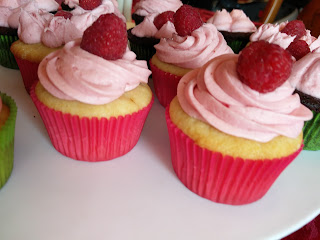 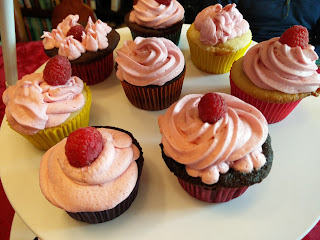 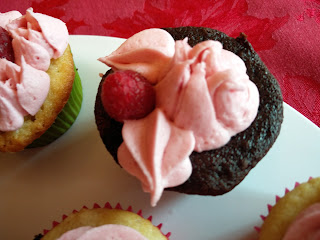 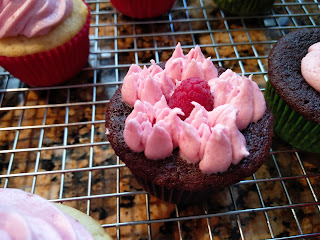 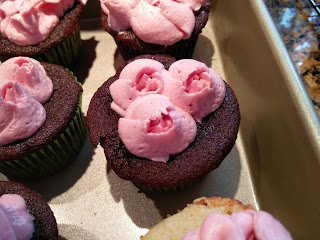 Raspberry Buttercream Frosting:
2 (heaping) cup fresh raspberries
1 cup unsalted butter, nearly at room temperature
1/2 cup salted butter, nearly at room temperature
5 1/2 to 6 cups powdered sugar (until right consistency is reached)
1 tsp vanilla extract
~30 fresh raspberries, for topping (depending on how many cupcakes are made and if you want a raspberry in the middle, under the frosting)

Chocolate Cupcakes:
1. Preheat oven to 350 degrees. Line a 24-cup cupcake pan with cupcake liners.
2. Melt chocolate in a microwave safe bowl on 50% power in 20 second intervals, stirring between intervals until melted and smooth, set aside to cool slightly. We needed almost 2 minutes for the chocolate to melt.
3. In a mixing bowl whisk together flour, cocoa powder, baking soda and salt for 20 seconds, set aside.
4. In the stand mixer, with the paddle attachment, mix together sugar and butter until combined. Mix in egg, egg yolk and vanilla extract. Mix in melted chocolate then mix in sour cream. Add half of the flour mixture and mix on low speed until combined then add remaining half and mix until combined. Add about 1/5 of the boiling water at a time, mixing until combined after each addition. Once water has all been mixed in mix batter on medium-low speed for 1 minute.
5. Divide batter among prepared muffin cups, filling each about 2/3 full (it's about 1/4 cup of batter). We got 16 cupcakes out of this batter.
6. Bake in preheated oven until set and toothpick inserted into center comes out clean, about 17 - 20 minutes. Remove from oven, transfer to a wire rack and cool. Once cool frost with Raspberry Buttercream Frosting and top with raspberries. Store in an airtight container in refrigerator.

Lemonade Cupcakes:
1. Preheat oven to 350 degrees.
2. Whisk together all-purpose flour, baking powder, baking soda and salt and whisk 20 seconds.
3. In a food processor, pulse together 3/4 cup granulated sugar with lemon zest until finely ground, about 1 minute.
4. In the bowl of an electric stand mixer, with the paddle attachment, whip together butter with lemon sugar mixture until pale and fluffy. Add in egg, egg whites, and vanilla.
5. Whisk together buttermilk and lemon juice.
6. Working in three separate batches, beginning and ending with flour mixture, add 1/3 of the flour mixture alternating with 1/2 of the buttermilk mixture and mixing just until combined after each addition.
7. Divide batter among lined cupcake cups. We got 17 out of this batter.
8. Bake in preheated oven until toothpick inserted into center of cupcake comes out clean, about 18 - 20 minutes. While the cupcakes are coking - prepare the simple syrup by mixing the 1 tablespoon of sugar with 2 tablespoons of lemon juice.
9. Remove from oven and allow to cool several minutes in muffin tin, then transfer to a wire rack to cool slightly. Brush the simple syrup on the warm cupcakes and allow to cook completely. After cooled, frost with Raspberry Frosting.

For the frosting:
1. Puree raspberries in a food processor until well pureed then force through a fine mesh strainer into a bowl to remove seeds.
2. Heat mixture in a saucepan set over medium-low heat until reduced by half. Cool completely.
3. In the bowl of a stand mixer fitted with the paddle attachment, whip butter until very pale and fluffy. Mix in 1 cup powdered sugar then mix in reduced raspberry puree and vanilla. Add remaining powdered sugar and mix until light and fluffy.
4. Add one raspberry to top of each cupcake if desired, then pipe frosting over raspberry and top with another raspberry. Store in an airtight container.

These were SOOO good. The chocolate ones were exceptionally good.

Took a really long time to make. The frosting got too "soft" and we had to put it in the fridge for a little bit to harden. Although, it seems like if the frosting hardened too much then it wouldn't stick to the cupcake. We are still figuring out frosting.

Work on figuring out frosting. Maybe only make the chocolate ones - everyone seemed to love those more.
Posted by kotenka at 2:54 PM